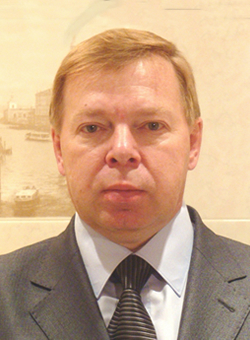 Topic: Novel Types of AC Motors and Drives for Electrical and Hybrid Vehicles

Abstract: The novel types of AC motors and drives for electrical and hybrid vehicles were worked out by the authors of this paper. These types are based on the use of the phase-pole-controlled multiphase (i.e. having number of phases more than four) inverter-fed linear stators. The phase-pole-control method is novel method of electromechanical systems control. It was developed by the author a few years ago for multiphase AC electric drives and molten metals electromagnetic stirring systems.
The application of phase-pole-control method together with the increase of drive system phase number more than four allows to improve considerably a number of the drive technical-and-economic characteristics (such as speed of response, reliability, mass-and-overall dimensions, etc.).

Biography: Dr. Peng-Sheng Wei received Ph.D. in Mechanical Engineering Department at University of California, Davis, in 1984. He has been a professor in the Department of Mechanical and Electro-Mechanical Engineering of National Sun Yat-Sen University, Kaohsiung, Taiwan, since 1989. Dr. Wei has contributed to advancing the understanding of and to the applications of electron and laser beam, plasma, and resistance welding through theoretical analyses coupled with verification experiments. Investigations also include studies of their thermal and fluid flow processes, and formations of the defects such as humping, rippling, spiking and porosity. Dr. Wei has published more than 80 journal papers. He is a Fellow of AWS (2007), and a Fellow of ASME (2000). He also received the Outstanding Research Achievement Awards from both the National Science Council (2004), and NSYSU (1991, 2001, 2004), the Outstanding Scholar Research Project Winner Award from National Science Council (2008), the Adams Memorial Membership Award from AWS (2008), the Warren F. Savage Memorial Award from AWS (2012), and the William Irrgang Memorial Award from AWS (2014). He has been the Xi-Wan Chair Professor of NSYSU since 2009, and Invited Distinguished Professor in the Beijing University of Technology, China, during 2015-2017.

Abstract: A surface plasmon on a metal surface can be excited by an incident laser beam in a TM mode. The TM mode represents that magnetic field is perpendicular to the incident plane of electrical field. The surface plasma wave is an electromagnetic wave that propagates at the boundary between two media, leading to a distributed heat input on the surface. This study is thus to predict heating and melting of a workpiece with a self-consistent, deformable free surface via a surface plasmon induced by a pulsed laser in TM mode. A systematical investigation of heating and melting of micro-scaled components in various plasma processing and nanotechnology is therefore provided.